Lucky Enough: A Year of a Dad’s Daily Notes of Encouragement and Life Lessons to His Daughter is a recently published non-fiction book by Chris Yandle, an adjunct instructor in the College of Nursing and Health Sciences Sport Management program. After penning notes of encouragement and guidance to his young daughter that went viral when he shared them on social media, he wove them into a heartfelt publication which was released this past fall. Yandle shared with us the story behind what led to that first note, the publication of his book, and what the project has meant to him. 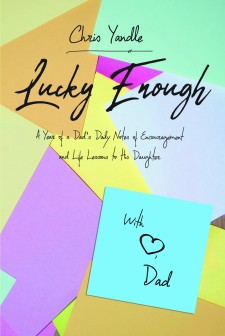 Not every story starts like a fairy tale, and the story behind why I started writing notes is paved with good intentions—although it’s a story at times I didn’t think would ever be written.

In my previous career, I spent more than a decade chasing my life’s dream of being a college athletics director. Chasing that dream required moving my family all across the country from Lafayette, Louisiana, to Waco, Texas, to Miami, Florida, to—finally— Atlanta, Georgia. When we arrived in Atlanta in 2014, I thought this was the most important stepping stone to achieving my career goals. At the age of 32, I thought I was getting closer to “making it” while putting my wife and two young children in a position to succeed.

Through our many moves as a family and the many moves I made before as a young adult, I learned many life lessons—some without pain and regret, while others were dripping in difficulty, heartache, and results that were oftentimes difficult to swallow. The most difficult lesson came in 2016 when I lost my job. My dream career path abruptly ended. We were some 600 miles from home with no plan in regard to what’s next.

My wife Ashleigh and I ultimately decided it was time to come home to Louisiana. We decided to move to Mandeville in St. Tammany Parish to give our kids a great education and stable quality of life for the first time. When we enrolled our kids in school, Ashleigh and I suddenly had the realization that our daughter Addison would start third grade at
one elementary school and then begin fourth grade at another school. That would be her fourth school in five years. This was not how we planned, and if we could do it all over again, we would have strived for more stability in our children’s school environment.

Nevertheless, she excelled in third grade and had been a resilient young lady through all of this transition . . . until fourth grade. She began exhibiting signs of anxiety, and since Ashleigh and I both battle anxiety and depression, we knew we didn’t want her anxiety to consume her. What’s a dad to do?

After I made Addison’s and our son Jackson’s lunches for the first day of school, I wrote their names on their new lunchboxes—because kids need new everything for the first day of school!—and after I wrote her name, I had an idea. I grabbed the Sharpie and wrote a message on her sandwich bag: Addy—Treat everyone like they are the most important person you’ll ever meet. Love, Dad. I took a picture of it, posted it on my social media platforms, and after that, I didn’t think twice about what I had done. 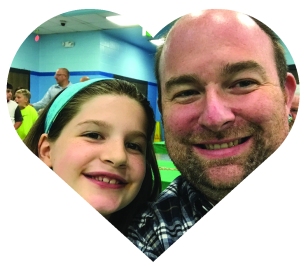 I kept doing this for the next few weeks, seeing if Addison would say anything about the messages I wrote her. At least give me an ‘Ugh, dad!’ response. One morning, we were running late for school, and as I was hastily putting together their lunches, Addison reminded me: “Dad, don’t forget my lunch note!” On the outside, I was playing it cool, but on the inside, I was dancing and singing loudly! She does notice what I’m doing!

It was in that same week that her fourth-grade teacher asked me if it were OK if she used one of the notes to share with her class. Soon, her principal was following me on Facebook and lamenting that these notes were the highlight of her week. They were the first two people who suggested that I collect these notes and put them in a book.

Midway through Addison’s fourth-grade year in March 2018, I started a Kickstarter account to raise money to publish my book through an independent publisher out of New York City. In six weeks, I raised $3,500, and my dream of writing a book became a reality.

My book, Lucky Enough: A Year of a Dad’s Daily Notes of Encouragement and Life Lessons to His Daughter, was published in September 2018 and hit the shelves at Barnes & Noble locations in Metairie, Mandeville, and Lafayette in early 2019.

Since that first note I penned, I have written more than 300 notes to my daughter that range a variety of topics—but most importantly, they are a daily opportunity for me to tell Addison how much I love her. 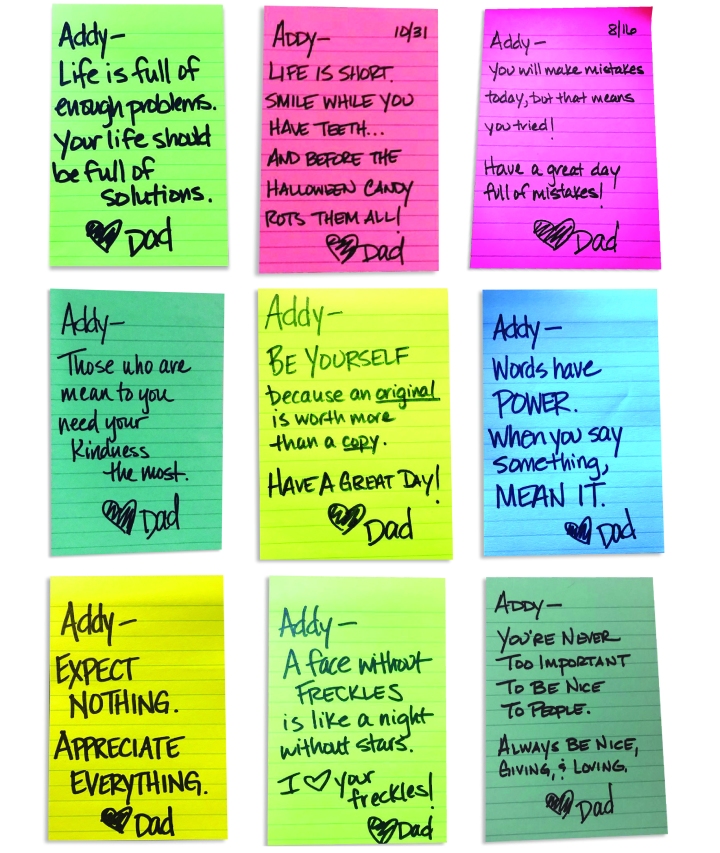