As the weather starts to work its way out of the winter doldrums in March, most people are dreaming of the beach and sand between their toes. This spring those dreams are jumping to a new level for the student-athletes on Southeastern’s inaugural beach volleyball team.

Enjoying a surge in popularity, 75 collegiate programs competed last season in what the NCAA once termed an emerging sport. With the advent of a sanctioned national championship in 2016, beach volleyball became a full-fledged sport with Southeastern joining a host of Southland Conference schools in expanding its offering.

“We’re excited to add beach volleyball,” Director of Athletics Jay Artigues said. “It’s the most popular up-and-coming sport in the NCAA. We wanted to make sure we didn’t fall behind. There were already six schools in our conference with beach volleyball and, counting us, there are eight this year. Pretty soon everyone in the Southland will have it.” 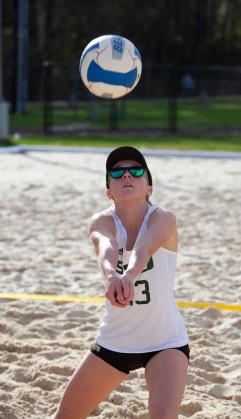 The Southland Conference now has enough schools participating in the sport to sanction a conference championship, joining the Atlantic Sun, Big West, Ohio Valley, Pac-12, and West Coast as traditional Division I conferences sponsoring the sport.

“With the continuing growth of beach volleyball across the NCAA, the Southland is excited to expand its sports sponsorship to provide student-athletes with a championship opportunity,” Southland Commissioner Tom Burnett said. “This will be another great competitive opportunity for Southeastern’s athletic program, and we look forward to seeing the beach volleyball team challenge for this new championship.”

“[Our schedule] sets up well for us as a first-year program,” Head Coach Jeremy White said. “We’re going to play some competitive matches against some pretty good teams. There are also opportunities for some real success.”

The NCAA allows schools sponsoring both beach and indoor volleyball to allocate up to six beach-specific scholarships. Players on an indoor scholarship can play both, while players on a beach scholarship may not compete in the indoor season. Southeastern’s initial complement of beach players will feature mostly double-rostered students competing during both the indoor and outdoor seasons.

“We want to be competitive,” White said. “That’s our big focus. We have a learning curve with a largely double-rostered team, but we want to be competitive against everyone we play. Our big goals are, no matter how we start the season, to improve throughout and finish strong. Everyone gets to go to the conference tournament, so we could be a completely different team between the showcase and when we face everybody again.”

Besides the obvious difference in sand courts versus hardwood, there are several other differences between the beach and indoor version of volleyball.

“Beach is a game where you don’t have to be as freakishly athletic as indoor,” White said. “You can be savvy. We have some players with experience in the beach game and some big, physical players. We also have players that may be undersized for indoor, but they can be really effective attackers on the beach because of how the games differ in regards to shots and being able to drive the ball.”

While both are team sports, the way indoor and beach teams compete is completely different. Indoor volleyball has all six players on the same court, keeping the team as one unit. However, beach volleyball teams are split into five pairs each competing at the same time with the five pairs from the other team. Each paired match consists of three sets played to 21, 21, and then 15 points. The first team to have three pairs win their matches wins the contest (called a dual in beach volleyball).

In the indoor game, certain people look for the block, the dig, and then the kill. But on the sand, both players have to be ready to contribute in every way.

“Everyone has to perform every skill,” White said. “There’s a lot less offensive strategy in regards to multiple people going up at once, because there is only one attacker, but there is strategy in how you want to play teams. If you want to move blockers by running faster balls to pins, go high, or behind players, those are things we’ll focus on as we develop our offense with each pair.” 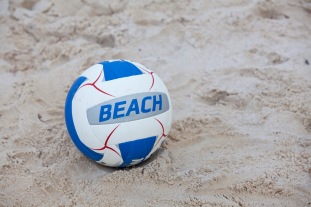 Players are also competing against the weather. This may seem obvious since beach volleyball is played outside, but the challenges weather present means that new strategies for working around those challenges must be developed and learned. Luckily, the sport itself has integrated some handicaps due to weather concerns. Sunglasses are allowed, and teams switch sides every seven points, so the sun affects both teams equally. Indoor volleyball coaches are allowed to instruct their teams after each point, but beach coaches are only allowed to talk to their players during side changes.

All of these differences make for an interesting challenge for White and his coaching staff as they prepare for the first beach season in program history.

“Our strength will revolve around having a lot of players used to doing multiple things,” White said. “That translates well to the beach game. We have players that played six-rotations in high school, club, or college; we also have quite a few that have already played beach and are used to the skills required. A team that is completely double-rostered, with a lot of players lacking significant beach experience or not as many six-rotation athletes, will struggle with the ball-handling and setting portions of the game.”

Years of planning have gone into the addition of beach volleyball at Southeastern, and the Beach Lions are the first addition to the University’s roster of varsity athletic teams since women’s soccer debuted in the fall of 1995.

“We’re Title IX compliant and always will be,” Artigues said. “We strive for that each and every year. Adding beach volleyball as a sport not only fits what we’re doing, but also follows the national and conference trend. When you look at adding a sport there are a lot of factors involved, such as popularity, number of opponents available in close proximity, financials—adding beach volleyball just made sense. The sport also provides an opportunity without making a huge impact to our budget. Most of our student-athletes were already on campus. The timing and fit were perfect.”

For more information on the Southeastern Beach Lions and Lady Lions Volleyball, visit lionup.com, @LionUpVB on Twitter, @SLUathletics on Facebook, and Southeastern Sports Network on YouTube.