The Southeastern Channel has won the national College Coronavirus Coverage (CCC) Award for Northshore News Update: Coronavirus on the Northshore. The award was administered by the Society of Professional Journalists in conjunction with the Associated College Press; Society for News Design; College Broadcasters, Inc.; and the Foundation for Individual Rights in Education.

The CCC Awards recognize excellence from college journalists for covering COVID-19 on their campuses and in their communities amidst campus closures and continuing online classes at home, said Southeastern General Manager Rick Settoon.

Settoon said the judges, all professional journalists, praised the Southeastern Channel as “expertly adapted to excel in this difficult climate, resulting in a strong, smooth newscast. They have been consistently good every week. The stories, the story choices, the diversity, the mix—all were excellent.”

“We’re extremely honored to be recognized as best in the nation by the prestigious Society of Professional Journalists, the world’s largest journalism organization,” said Settoon. “We’re so proud of our students who’ve stepped up big time to serve their communities during this crisis while having to complete online classes at the same time.”

The weekly newscast provides timely information on the coronavirus, specifically for Northshore residents. It is a condensed newscast that spotlights critical services for those in Tangipahoa, St. Tammany, Livingston, and Washington parishes provided by specific parish governments, school systems, hospitals, law enforcement, and business organizations.

The information provided spans everything from coronavirus testing and school food distribution to small business disaster loans. Also included are phone interviews with parish and state officials, such as parish presidents Robby Miller of Tangipahoa, Mike Cooper of St. Tammany, and Layton Ricks of Livingston, along with state representatives Richard Nelson of Mandeville and Randal Gaines of LaPlace.

Lorraine Weiskopf of Covington covered St. Tammany Parish. Having demonstrated hands-on experience and skills through her work with The Southeastern Channel, she was hired by WXXV-TV Ch. 25 (FOX/NBC) in Gulfport, Mississippi, as a news reporter months before her graduation this past May.

“I was thrilled to win this award, especially with many big-name universities placed alongside us,” Weiskopf said. “My team and I have put a lot of work into this, and I am so happy to see that it paid off.”

“I feel so honored to play a role in this program, and for us to win is another level of excitement because I know how hard we work each week to produce excellent content,” said reporter Gabby Cox of Hammond, who covers Tangipahoa Parish.

“To be up against so many other universities and college broadcasters and to come out on top is such an awesome feeling,” said Kaylee Normand of Mandeville, who covers Livingston Parish for the show. “We have all put in so much time and effort to make every aspect of the shows perfect, and it’s really just rewarding to win this and see our hard work paying off.”

Since the students are forced to work from home during the pandemic, and thus are unable to shoot interviews and footage to avoid face-to-face contact, their reports lean on phone interviews and graphics with timely information in the form of websites, phone numbers, URLs, and times and locations of the vital services provided in each parish.

“This show is important because each week we strive to get the best and latest information to give to the people in our community,” Cox said. “The feedback that we receive from our viewers makes it all worthwhile because I genuinely feel like we are being helpful during a time that most of the world feels helpless.”

“We are gathering information about things that are happening within smaller communities on the Northshore,” Normand said. “Most news stations are covering things that are going on in the entire state right now, but I feel like we narrowed that down to particular parishes, and we are giving those residents all of the information about what’s
going on in their backyards.”

“It takes a lot of extra work and a lot of phone calls throughout the day, but it makes for an interesting and informative show,” Normand said. “And that is the most important thing that residents need right now. They need to hear something that they haven’t already heard before.”

The students feel strongly that working on the coronavirus update in addition to the regular newscast provides real-world training that prepares them well for a career, Settoon said.

“Northshore News is fantastic because it allows you to take away as much as you put into it,” Weiskopf said. “It’s a student-run newscast that provides unlimited opportunities for us to develop shooting, writing, and editing skills for news. It also helps us understand the production necessary behind a newscast. When we create live shows, there are many opportunities to operate cameras, a teleprompter, audio, and visuals. Students can learn everything so they can be well prepared for jobs in the TV news industry.” 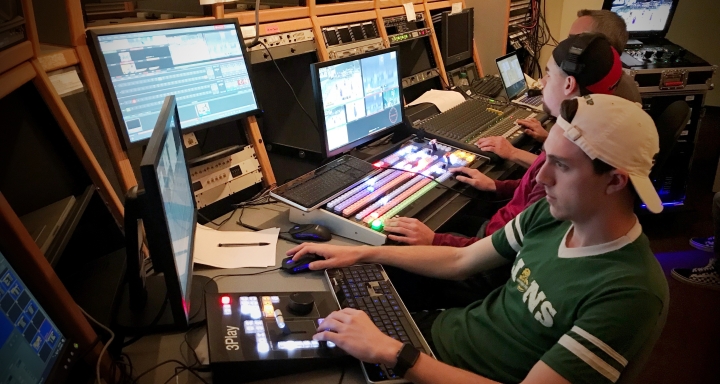 New episodes debut at 4 p.m. each Friday and air throughout the day every day of the week on The Southeastern Channel, which can be seen on Spectrum 199 cable throughout the Northshore for a potential viewing audience of 250,000 in Tangipahoa, St. Tammany, Livingston, and St. Helena parishes.

Live streaming of the 24-7 Channel broadcast can also be seen on Roku and Apple TV along with thesoutheasternchannel.com, which offers video on demand of all episodes. The coronavirus update can also be accessed through the Southeastern Channel accounts on Facebook, Twitter, Instagram, and YouTube.

In its 17 years of existence, the Southeastern Channel has won over 400 national, international, and regional awards.